skip to main | skip to sidebar

An exhibit that opened this weekend at the Japanese American National 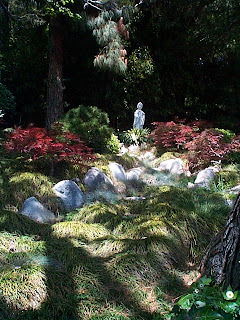 Museum in Little Tokyo caught my eye. The press release at the exhibit website says: “Landscaping America: Beyond the Japanese Garden explores those dimensions of Japanese American gardens and gardeners that are not immediately or generally visible. Gardening and gardens involve physical labor, artistry, community relationships,” explains exhibition curator Sojin Kim.
(Author's photo of the gardens at Self Realization Fellowship Lake Shrine Center in Pacific Palisades)

The japanese garden aesthetic can be found all over LA and Southern California, in formal, public gardens, office buildings and all kinds of private homes, especially many mid-century structures. .This JANM project recognizes the aesthetic, cultural and economic impact of a group of immigrant laborers working in a low paying, low prestige job. These folks are the true, unrecognized creators of southern California culture, as much as any high profile film or television writer, director or producer.

I still have fond memories of the landscaping at the mid-century redwood apartment complex that I lived in as a child in North Hollywood. At the time I didn't know that the finely textured plant with red berries that I admired was a heavenly bamboo or that it and the pebble paving were inspired by Japanese style gardening. I just knew that I enjoyed the feel of that paving on my bare feet as I got out of the pool and that the pavilion-like stucture that held the mailboxes made collecting the mail everyday (one of my chores) fun.

I hope to get to this exhibit while it's here, especially to see the japanese style garden installed indoors on the second floor of the museum. I have yet to be dissapointed by an exhibit at JANM. The Heart Mountain exhibit was really moving and thought provoking. The Boyle Heights project (see link in Father's Day post) was one of the best in-depth treatments of LA neighborhood history that I have seen. It inspired my own work on neighborhood history a few years later on “From Generation to Generation: Making a Life in South Los Angeles, 1940–2005” a community history project at the Southern California Library for Social Studies and Research (see link at right). It was also great fun, my Dad and I went together on opening night and he later brought several relatives who had also grown up in the area. The Noguchi exhibit was beautiful and enlightening.
Posted by Lex No comments:

"that kind of mexican"

While browsing Loteria Chicana, I came across this blog post at jenn's journeys that resonated with my own experience growing up in the San Fernando Valley as a third generation Mexican-American whose first language was English. I also heard the comment that I wasn't "that kind of mexican". When I read this, I first felt an odd sense of relief to learn that I wasn't alone in hearing such comments. Then I was angry that I wasn't the only one to have to deal with this kind of thing on top of the usual confusion and conflict of adolescence. This kind of thing doesn't end once we're safely past puberty. I can recall hearing similar comments more than once as an adult, though adults are usually -but not always -more careful with their choice of words.

It's worth the time to read the whole post. Thanks to Loteria Chicana for the link and for her thoughtful post about Chicana identity and how we are judged by others, Chicanos and Chicanos alike.

Posted by Lex No comments:

Father's Day on the Freeway 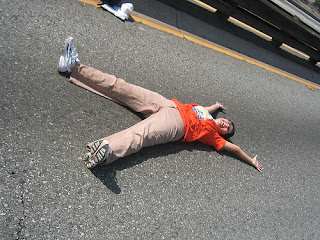 “Go play on the freeway” my uncle Victor would jokingly tell me and my brothers, when, as children, we would complain about having nothing to do. In June 2003, my family celebrated our last Father's Day with my Dad by doing just that. My family, along with thousands of people from across Southern California walked, biked, strolled, and skated on the Arroyo Seco parkway, known to most locals as the Pasadena Freeway (See more photos on flickr.com). For this one morning, the freeway was closed to cars for the ArroyoFest, a celebration of the communities that flank the freeway organized by locals and Occidental College. I was a volunteer on the steering committee that planned and organized the event. When I started working on this effort, the date of the event was uncertain, and I could not foresee that the event would take place on Father's Day nor that my Dad would die suddenly 4 months later.

In a way, spending the day on the freeway with my Dad was a very ordinary experience for me and my brothers. After our parents split up, we logged many hours crossing the city for our weekend visits with our Dad in Venice and later, the Valley. Because of my Dad's devotion to our extended family, we often spent holidays on the road, visiting great aunts, uncles, cousins, second cousins and godparents, relatives who, to our childish minds, were connected to us only in vague, mysterious ways. Though I could not tell you the addresses or zip codes of my family members, I can still recite the routes we drove and the freeway exits we took to see family spread out across the LA area in Sun Valley (the 10, to the 101 to the 170) , Baldwin Park, City Terrace, Norwalk and other communities. These journeys are deeply etched in my brain and make up a large part of my own personal geography of Los Angeles.

Some may see my memories of time spent on the freeway as evidence of the toll that sprawl takes on Angelenos. And, some days, especially when I recall the times that Dad's old '64 Ford pickup or later, his beloved '69 Mustang that he called Geraldine, stalled halfway to our destination, I would agree. Other times, I recall the timbre of his voice each time we passed Kent Twitchell's Old Lady of the Freeway mural on the side of a building visible from the 101 in Echo Park when he said “Man, that is a cool mural”. I remember him sharing his memories of walking with his father from their house in Van Nuys to visit family in East Los Angeles via San Fernando Road and Riverside Drive, in the days before the LA freeway network would make this journey easier while also forever altering the landscape of East LA and the lives of those displaced. As he described it, traveling this distance was a big adventure, made more arduous by the fact that my Dad walked a lot of the way, since my grandfather couldn't afford the streetcar fare for both of them.

Passing certain personal landmarks while getting around the city keeps me connected to the self I was as a child, who learned to see the world through the eyes of a remarkable man who taught me all he knew. The smell of roasting chiles--so strong that it would burn your eyes and throat if you weren't passing by at 6o mph-- from the salsa factory near the intersection of the 5 and 10 freeways on the eastern edge of downtown Los Angeles always reminds me of sitting next to my Dad in the front seat of his old truck, listening to Bob Dylan, jarocho , or Bill Withers on his 8-track player. From that vantage point, I learned to appreciate the landscape of our hometown, from the most humble apartment house to the much photographed facade of City Hall. He pointed out places that members our family lived- in the belching shadow of Interstate 5 in the City of Commerce, in Boyle Heights near the 2nd street off-ramp- and worked-chrome plating facilities, lumber mills and garment factories. The most fantastic story he shared was about the location of our family's famed buried treasure, hidden under the paving and earth behind the modest shop that once housed a great uncle's landscaping business, a short distance off the Cahuenga exit of the 101. When I look out at the lights of downtown LA from my house in Highland Park, I remember the view from the westbound 10, and the joy shining in my Dad's eyes as he said “Look at that, Lex” pointing to the skyline behind City Hall, “Isn't Los Angeles purdy?” Today, when I see that view, I think to myself “Yes, Dad, it is.”

As my husband and I prepare to celebrate our first Father's Day with our 9 month old son Elias, I struggle to figure out how to best deal with the heavy sense of loss that deposits a knot in the pit of my stomach whenever a holiday or birthday without my Dad looms on the calendar. I am angry that my Dad is not here to tell my son all about LA, and that my son will never hear the joy in my Dad's voice as he narrates his knowledge of our hometown. And, on nights when I'm kept awake by these emotions churning in my brain, I toss and turn as I think about how the untreated high blood pressure that contributed to my Dad's death was likely aggravated by the stress he dealt with, growing up poor and Chicano in the 50's and 60's and later as a single father with a high school education trying to earn a living and raise a family in this city. 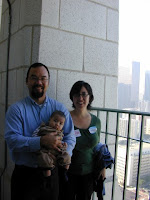 the rest of the world and to keep applying my professional skills, education and passion to the goal of making LA a more livable place. And I know that one of the most important ways to connect my father and son is by making sure my son knows and experiences the natural environment, landmarks, culture, festivals, food and people that represent the richness and promise that LA can offer.

Posted by Lex No comments:

Labels: arroyo fest, chicano, los angeles history, Northeast Los Angeles, Sense of Place
Newer Posts Older Posts Home
Subscribe to: Posts (Atom)
A place belongs forever to whoever claims it hardest, remembers it most obsessively, wrenches it from itself, shapes it, renders it, loves it so radically that he remakes it in his own image. Joan Didion