skip to main | skip to sidebar

Across Two Generations: A Love Affair with Los Angeles

It is a clear spring day, the sunshine and a spectacular view of the San Gabriels behind the downtown skyline dazzle me as I drive north on Main Street, on my way home from work. My thoughts wander as I pass grim-faced garment factories, sidewalk paleta vendors and the crowds that line the sidewalks of Skid Row (or Gallery Row, as it has been christened by the neighborhood council).

Taking in these scenes of urban life, I feel joy and gratitude that I live in such an exciting, beautiful, and even contradictory place where the breathtaking natural features are within view and driving distance of all the colors and classes of people who make this place their home. In my mind’s eye, I see my Dad’s wide grin and sparkling brown eyes, and hear the words he would often say on days like this: “I LOVE .”

I, too, LOVE . I feel a sense of belonging and rootedness that is not often shared by newcomers or even long-time transplants, portrayed in movies or examined by the many academics and others who attempt to describe and dissect . My Dad, Tony Moreno, has passed on to me his deep love for this place. This inheritance is priceless and has allowed me to build a rich and meaningful life in a place that is derided for its rootlessness and shallowness.

Though he loved this city, my Dad understood its faults and the injustices endured by many here, including our own family. He introduced me to those too, by deciding that I was old enough at 14, to read and understand the Raymond Chandler novels that he passed along to me, by sharing his stories about growing up in East LA and the Van Nuys barrio, and the milestones of LA history, as he understood and experienced them. Born in 1949 at LA County hospital, my Dad spent his early childhood in Van Nuys with his paternal grandparents, Antonio and Balbina, who had emigrated from in the early decades of the twentieth century. During his 54 years here, he witnessed many key events in LA history: the development of the San Fernando Valley, the construction of most of the LA Freeway network, the Chicano Movement, the Sylmar earthquake, the 1984 Olympics, to name just a few.

Filtered through my Dad's intellect and love of storytelling, these LA milestones became part of his story. Joyous and generous by nature, he marvelled at the beauty of LA, despite his childhood experiences with segregation and unjust conditions in East LA. As an adult, he would praise the beautiful aspects of life here and proudly and happily share his stories and views with friends and family. He especially loved showing out-of-town visitors the things he felt make Los Angeles great: Venice Beach, the Griffith Observatory, Mulholland Drive on a clear night, the Great Wall mural in the LA River, Chinatown, the hills of City Terrace .

As a teenager, I cringed every time my father would tell us (for the umpteenth time) his stories: the chickens that his grandparents raised; his shock when he saw his grandmother kill one of the chickens for dinner; the time he painted the dog green to match the newly painted house; the way the relatives all lived in houses next to one another on Delano Street in Van Nuys or back to back, without fences so that the extended family was able to freely walk from one house to the next. He also spoke fondly about the farm fields and open spaces that still existed in the San Fernando Valley in the early 50s; running away from home as a child to the Sepulveda Dam, and running back home at dusk, driven by the fear of the hobos who--he had been warned-- would catch and roast small children to eat, walking miles (or so it seemed) in the mid-summer Valley heat with his uncles to have “tomato wars” in the newly picked tomato fields.

He had a story for just about every part of town we visited together: and East LA, where he lived as a teenager, the garment district where he got his first job after high school, City Terrace, Dodger Stadium, the site of the love-ins and be-ins he would attend with my mother. When I lived in Silver Lake in the early 90’s, he told me about going to parties in Silver Lake in the 60s and encountering openly gay Latinos for the first time.

After my parents split up, my Dad moved to , away from relatives and the places and memories that all his stories recounted. Here, he made new memories with his children, exploring a new part of town and discovering the things that made this place beautiful and distinct: the “free box” where Venice neighbors would put unwanted household items, clothes, books and toys to exchange with one another; the bike paths, the marina, the boarded up carousel on Santa Monica pier, Muscle Beach, the hand ball courts where men of every size, stature, and color gathered for pick-up handball games.

Only later, as an adult and urban planning student would I realize that these experiences with my father and his stories connected me to this place in a way that would bring meaning and structure to my life. As I go through my life without him in it, I often stop to remind myself that he is the source of much of the hope and energy that drives me in my efforts to make LA a more just place. Each time I share one of his stories or my own, or talk about LA history, I am sharing the legacy of joy, beauty and hope that he left me.
Posted by Lex 1 comment:

Seeing through my Father's Eyes: Musings about my Dad, and his view of our Hometown...Los Angeles

I began writing about my relationship with Los Angeles after my dad's sudden death in 2003. Grieving the loss of this important person in my life, I began writing as a way to name and hold 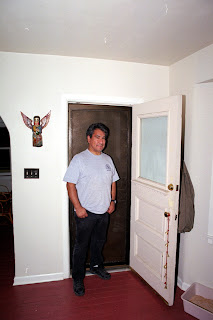 on to the things that made my Dad unique and the ways in which he contributed to my world view, and especially the ways that he passed on his love for Los Angeles to me. I hope that writing these things down will keep them in front of me, the way that my talks with my Dad did when he was alive.

Sorting through my Dad's possessions after his death, I came across photos of our family in the early and mid-70's and found that most of the photos my Dad had taken of my brothers and me were posed in front of murals and other public art, the pavilions on the Venice Board walk and the Santa Monica pier, giving a distinct sense of place to those memories. My Dad's passionate interest in the features that make each L.A. neighborhood unique, and his documenting these things in family photos, were my first lesson in urban planning. Looking at those photos, it seems inevitable that I would grow up to study urban planning and L.A. History.

What I hope to convey through this blog is the many different ways that I've come to understand Los Angeles. This is my effort at presenting a holistic picture of Los Angeles, one equally influenced by my father and his viewpoint and stories as by the work of scholars, filmmakers, and historians and filtered through my own experience as an Angeleno, an urban planner, historian, community organizer, Chicana and a person passionately engaged with her hometown, Los Angeles.

Labels: chicana, Los Angeles fiction, los angeles history, Santa Monica Pier, urban planning, Venice
Newer Posts Home
Subscribe to: Posts (Atom)
A place belongs forever to whoever claims it hardest, remembers it most obsessively, wrenches it from itself, shapes it, renders it, loves it so radically that he remakes it in his own image. Joan Didion